Well, Nearfest is over, and what a great weekend it was. Following are my thoughts and opinions of the events of the past 3 days...

Let me first say it was great being able to meet more people....Steve Ispay, Thom Overstreet, and Kevin Cassidy (who brought his 13 year old daughter...little warms the heart more than to see kids that are musically open-minded...she was even wearing a Frogg Café t-shirt), Scott Montgomery, and a host of others.
Also, it was great seeing the usual suspects again....Bill K, Donna K, Robert D, Allison, Adam P, Andy K, Andres, Dave Floyd, and of course Mike H, my "roomie" for the weekend.
Sincere apologies if I've forgotten anyone.

Anyway, on to the weekend...

Friday was fantastic...a great start to the weekend.
I originally hadn't planned on going to the preshow, but after seeing Proto-Kaw in Metuchen a month ago, I wanted to see them again, so thanks to an extra ticket that Adam had, there I was.
Proto-Kaw was just as good as last month, and it was an exciting start to the weekend.
I'm really looking forward to their next CD due for release in September.
Then came PFM (Premiata Forneria Marconi). I'll admit that not really caring much for Metamorfosi last year, I didn't have high expectations for PFM. IOW, I prejudged them based on their country of origin. The upshot to pre-condemning a band is that the satisfaction level can only go up. In the case of PFM, my satisfaction level skyrocketed. They were amazing. Nothing like I expected. A very exciting band full of energy. And I actually preferred the songs sung in Italian over those done in English...which had to be read by singer/drummer Franz Dicioccio.
PFM was probably my favorite unknown-to-me band of the weekend. I can't believe I reached the age of 42 without having a clue who these guys were.

Saturday...between the unintentional procrastination by Mike and I in the morning (eating breakfast and jaw-jacking) and not being able to find parking, I walked in almost 30 minutes late for Wobbler, and I didn't want to bother others by working my way to my seat, so I stood on the side steps for the remaining 30 minutes of their set. Admittedly, because of these factors, I couldn't really get myself into Wobbler. What I did observe though was that while I enjoy their music (listening to Hinterland as I type this), they seemed to drone on unnecessarily. IMO, they took 30 minutes to get a 15 minute message across. I don't feel that way listening to the CD, so maybe it was just the circumstances of my late arrival, but I heard similar opinions from others who were there on time.

Next was Frogg Cafe. I'm not gonna go into detail about bands I've already praised.
I love these guys...saw them twice before this, and they did not disappoint this time either. The highlight was seeing Frank Camiola (original guitarist and co-founding member) join the band for Waterfall Carnival (one of my favorite FC tunes). That was really cool.

I didn't watch Steve Roach. Mike and I were hungry and went for lunch. Besides, electronic ambience is not something I want to sit and watch.

Present was next. I'm not really into RIO bands, and Present is no exception. This very dark type of music is not my cup of tea. However, I did stay for the entire set mainly because I was mesmerized by the drumming of Dave Kerman. He was a marvel to observe and he single-handedly kept me interested in Present.

Saturday was capped by I.Q.
I really like these guys. I thoroughly enjoyed their set, and I am a big fan of what most seem to call "neo-prog"...a term I don't really get, because "neo" means "new", and what people call neo-prog is stuff that emulates the "classic" prog sound. Whatever...I'll leave the term coining duties to the progholes.
I do have to say this though...I only own their most recent CD, 'Dark Matter', and after seeing their set, I feel like I don't need any other CDs. IOW, there was a certain "sameness" to their music that made me feel that Dark Matter is more or less representative of them (plus the fact that the DM material was my favorite part of the performance). I discussed this with several more knowledgeable people (not IQ sycophants though), and the consensus that I got was this...most of their releases have at least a couple of unique and great tracks that make it stand out, but yes, they do have a "sameness" about them.
That being said, I liked them enough that I would most likely buy future CDs, but I don't think I'll be collecting their back catalog anytime soon.

Knight Area lived up to my preconceived expectations. I was very disappointed when we found out that Riverside could not make it and they were being replaced by Knight Area. I had purchased their CD "The Sun Also Rises" at last year's NF, and what I heard on the CD was not a derivative of Genesis, but a band about 4 bars short of being a cover band. Their performance Sunday morning was no different. I have little positive to say about them, so 'nuff said.

Next up....The Muffins....
For me, this was the surprise of Nearfest 2005. I expected a dark, RIO band like Present, but instead got a band that "wowed" me much like Hidria Spacefolk did last year. I guess "Avant-prog" is the way people describe them, or what used to be called "Acid Jazz" some 10 or 15 years ago. Again, I'll leave the proper labelling to those that it really matters to.
Now, I tend to favor guitar driven bands, but I have to say keyboard/reed player Tom Scott beautifully handles the melodies and chords that a guitar might (if there were a guitar). It was definitely the most interesting set of the weekend for me, and The Muffins have gained a new fan. Ironically, like PFM, the Muffins are another band that have been around (on and off) since the 70's that I never even heard of prior to now.

Matthew Parmenter was the solo spot for Sunday. I watched an extremely well executed introduction by Bill Knipsel (sic), then saw a guy with a mime-painted face come out, sit-down in front of a keyboard, move his hand to one key with the motion of someone about to place the top card on a house of cards, and then began a high, nasally chant while repetitively depressing a single note. That was it for me.
In my eyes, he came across as someone pretentious enough to say, "Hey, look at how profound I am."
It reminded me of Bono's stage presence after U2 became too cool for school.
Is it wrong to make a judgment like this in less than 90 seconds?
Absolutely...but that's all it took for him to turn me off.
To each his own, right?

Next up was Kenso....probably the most non-stop energy of any band all weekend.
While I will say that this is an incredibly exciting and technically proficient band, it loses it's luster with me after a few songs. Then it all tends to sound the same...much like classical music does with me. As I said, I much prefer guitar driven music, not keyboards (I was never much of an ELP fan, but I love Genesis...go figure), and Kenso is definitely a keyboard driven band, despite the most excellent guitar playing of Yoshihisa Shimizu. In fact, my favorite part of the set was when he was prominently showcased, which wasn't really until the last 30 minutes or so.
Anyway, I would have preferred them as an opener (i.e. a one hour set). Any more than that is a bit much for me.

Speaking of keyboard driven bands, Le Orme closed out the weekend.
Le Orme to me was a very ELP-ish band....similarly symphonic. While Michele Bon emulates a near perfect guitar sound on his portable organ, it wasn't enough for me.
I enjoyed them more than Metamorfosi, but nowhere near as much as PFM. While emotional Italian vocals are very beautiful and moving, they are not really my cup of tea for prog listening. The highlight for me was the sitar. I had never actually seen one played before, and it was really cool to witness.

Of course, there were people who couldn't understand how I could not fully appreciate Present, Kenso or Le Orme, but by the same token, I can't understand how people could walk out on Frogg Cafe or Proto-Kaw...but they did.
Different strokes and all that.

To sum up, this year's Nearfest was overall much better than last year's. This year I thoroughly enjoyed 6 bands (including Friday), while last year I can only say that about 1 (Hidria Spacefolk).
On top of that, being a "veteran" of the event this year, I knew more people, and met more people, and had much more fun. It really was a great weekend.

I also spent a LOT more money this year.

hehe...just realized that were I still married, today would be my 13th wedding anniversary.

Yeah, I'm still around....just haven't gotten around to posting anything in a while.
Been focusing too much on upcoming events rather than what's already been. 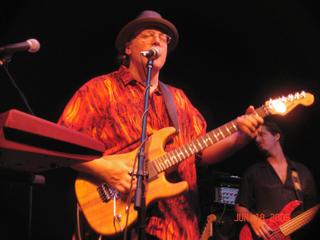 I went to see Mike Keneally in PA a couple weeks ago. That was a lot of fun. Got a seat at a cabaret table right up front. I would have had to sit on the stage to be any closer. They were filming a DVD, so it was a good time. It was a great show and spirits were high. Can't wait for the DVD to come out. 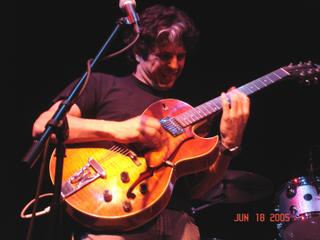 The Alex Skolnick Trio opened for Keneally.
(Alex of course being formerly of the thrash metal group Testament, as well as having toured with Ozzy). They were pretty good, but I'm not big on that kind of smooth jazz fusion. Although it was interesting if nothing else to hear Kiss' Detroit Rock City and Judas Priest's Electric Eye done in that fashion. :-)


Nearfest is less than a week away! I wasn't originally planning on it, but I'm going to the Friday night pre-show. I couldn't pass up the opportunity to see Proto-Kaw again. :-)

Anyway, I guess that's it for now.
More later.